Nominations are done via PaperCept. To do so, connect to ifac.papercept.net, select "Submit a contribution to IFAC WC 2017", and then select "Submit" in the row corresponding to "Nomination: Young Author Prize".

As the chairman the selection committee for the Young Author Paper (YAP) prize at the 2017 IFAC World Congress, I would like to encourage you to nominate young authors whose paper has been retained in the final program of the conference and is of high quality.

Since the IFAC award committee has recently modified the rules for the YAP prize, let me recall the new rules. The prize is for the best paper at the IFAC World Congress of an author younger than 30 years old by July 1, 2017. The author should be the first and corresponding author of the paper. He/She should also present the results during the World Congress. The prize and a certificate are awarded at the closing ceremony of the IFAC World Congress. Nominations may arise from colleagues or supervisors of the young author (no self-nominations is allowed) and should include a nomination letter. The latter has to indicate clearly that the nominee is younger than 30 years old by July 1, 2017. Nominations are to be submitted via the IFAC PaperCept conference manuscript management system. The nomination phase closes on March 1, 2017.

The members of IFAC Young Author Prize Selection Committee will determine based on the gathered reviews and on their own reading of the papers a short list of finalists, and notify the authors. The winner will be determined at the time of the Congress, on the basis of the written paper and the oral presentation.

I am looking forward to meeting you in Toulouse. Yours sincerely, 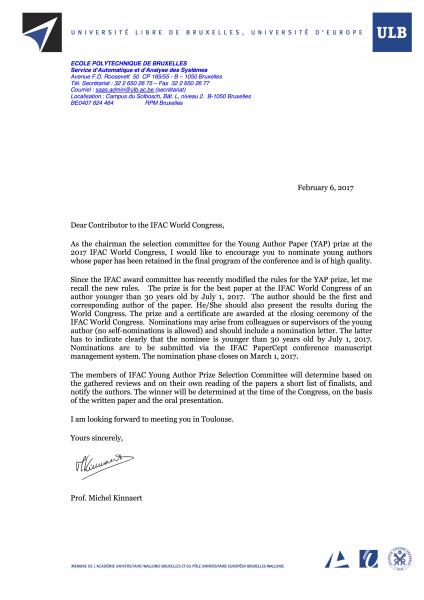