Moving around in Toulouse

The airport has fast access from and to the city center. With the 15-minute ride to the airport and the fast departures and arrivals in a medium-size airport such as Toulouse-Blagnac, the one-to-two-hour connecting flight from a major European hub is quite compensated, making access to Toulouse comparable to that of most European capitals. 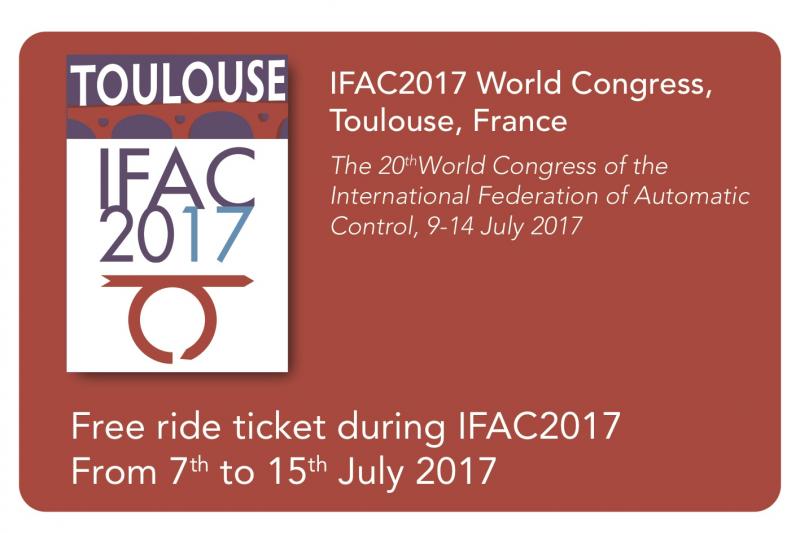 A free ride ticket is offered to all IFAC 2017 participants. It allows to travel without limitation during all the congress days on all the urban transportation system including Metro, Tramway and Buses. It does not include the Airport Shuttle.

See the Tisseo web page for information about the Toulouse transportation network.

A public pick-and-drop bicycle service operates in Toulouse 24 hours a day. The user can pick bicycles at any of the numerous VélôToulouse stations and drop it at any other. To access the service, buy a 1-day or a 7-day ticket at any VélôToulouse station. The 1 day ticket allows to use the service during 24 hours and costs 1.20€. The 7 days ticket costs 5€. No additional cost is billed if the bicycle is returned to a station in less than 30 minutes (which is far enough to ride through all Toulouse city).

See details about the VélôTououse service.

Visitors arriving from abroad will most probably arrive by airplane at the Toulouse-Blagnac airport. Toulouse benefits from frequent and rapid connections to major international European hubs including a one-hour shuttle service to Paris (La Navette). All destinations are listed here.

The best fare for your airline ticket

Attractive discounts on a wide range of fares on all Air France and KLM flights worldwide.
Event ID Code to keep for the booking: 29555AF
Direct link to the booking service here
More details here

Toulouse Matabiau railway station is easily accessible from major cities in France. The connections include high-speed TGV train links and sleeping-car overnight trains. Beginning 2 July 2017, the high-speed railway to the south-Atlantic part of France will be operational, making Toulouse accessible from central Paris in 4:09 hours.

Railways from Toulouse Matabiau station also allow easy access to some of the touristic locations in the region such as Carcassonne, Albi, Lourdes and many others (see the tourism page).

An arrival by car may be profitable for travelers intending to explore the Toulouse surroundings, the Pyrenees, the Basque Atlantic Ocean coast, the Mediterranean Sea, or the Cathar castles, or to do some shopping in Andorra. Six high-speed motorways serve Toulouse. The network of motorways makes the traveling time 6h30 from Paris and Nice, 3h30 from Barcelona and Marseille, and 12h from London, Rome and Munich.

If arriving by car, have in mind that the Toulouse city center is now almost pedestrian only. It is recommended to plan a parking facility.